My name is Shane Bouchard. I am the owner of Maine Home Recreation. I have a passion for all of the games we sell and I love what I do. I’m one of those lucky people who go to and come home from work happy on a daily basis. Like many things in life, it all happened quite by accident.

In 1999 I was 2 years out of high school,  had gone to college for a year and a half for Automotive Technology and decided that was not what I wanted to do. Like most kids my age, what I really wanted to do was still a mystery to me. I had taken up playing pool on a recreational level in high school and had transitioned into a league player by this time in my life. I was also working as a car salesman. What a miserable job that is as a new salesman in a down economy. I’m not one who enjoys staring at the ceiling for 12 hours but I was fairly successful and it really helped me learn about people and gain sales skills. Taught me a lot about how not to sell things too!

One day I happened to walk into the local Billiard store to get a shaft made for my pool cue, and it was apparent that the guy behind the counter did not know much about pool or sales. Turned out he was the owner. He had a partner that ran the Billiard business and they had split. After talking for a half hour or so I left with a job selling pool tables and game room equipment. It was a great combination for me, I was a strong salesman and I knew a lot about pool tables (or so I thought). One thing I learned very quickly was that I did not in fact know a damn thing about pool tables.

I see myself a lot these days as customers come in and tell me about talking to their friend who is a good pool player and knows “all about” this stuff. I sympathize, as I remember being there myself. A lot of my job now is education as public perception of what is good and what is bad in regards to pool tables is skewed by advertising and branding. I’m off topic… sorry, it happens a lot…

So as I worked in this showroom I learned the business. I took catalogs and spec sheets home and studied them. I sought out competing brands catalogs and spec sheets and studied those as well. I went on jobs with the installer and started doing my own installs in the showroom. I learned how to cover rails and eventually did all the rails for the outgoing tables. I did installs and service work between installers being hired and if helpers were needed. I also took over the game route the company had, where I moved, cashed out and serviced arcade games and coin operated pool tables / air hockey etc.

Now the aforementioned owner of this company was quite a character. Like most people he had good and bad qualities. I won’t expand on that either way but I will say I learned a great deal from this guy. Again both some of what to do and what not to do. He gave me a great opportunity and I am grateful for that. He used to talk a lot about people “living within their means”. An idea that makes sense. One day while he was ranting about it in the warehouse to someone a small light went off in my head. I got to thinking about my means and it hit me. If you want to live above your means… change your means! So what did I do? I put an ad in the local paper and went looking to do some yard work for extra cash. An extra 50 bucks a week would be nice! I got my first job and my grandfather gave me $100. He said go get a couple tools and another week of advertising. From there it grew.

By the end of the summer I found myself with a growing list of regular mowing customers and buying a commercial zero turn mower. The next year I hired my father to work for me on the lawn side, purchased a second zero turn mower and started snow blowing. All the while still working full time managing the billiard store.

The following Spring I landed a large mowing contract and it was time to put my efforts into the landscaping company. I left the billiard store and have been my own boss since. Immediately after leaving the store my phone started ringing from people looking for me to do pool table work for them. So I started building up the tools and supplies necessary to do more of that kind of work on my own. I teamed up with a friend / local pool hall owner and installed tables for many of the online retailers and moved / repaired and reclothed tables. Business was steady. As things expanded my friend needed to put more into his own business so he moved on. Using my father again I continued to service pool tables “on the side” to the landscaping company. The business was growing rapidly, I had a good method down for buying and selling used pool tables and it was working. Most retailers won’t touch used pool tables because “there is no money in them”. I’m glad they feel that way!

In 2012 a beautiful young woman named Allison came to my door looking for a job with the landscaping company. Her cousin had worked for me the previous summer and had suggested me as an employer. I hired her and she was a great worker! One afternoon I had to go to Massachusetts and get a 9’ pool table and my help was unavailable so I called Allison. “Is it heavy?” was her first question. “No, they aren’t too bad,” was my response. As it turned out, her first pool table experience with a pool table was removing a 9’ Brunswick Orleans from a basement in Massachusetts at 8pm handing everything out of a bulkhead with no stairs. Oh and when you got out of the bulkhead you were under a deck… lots of fun! But she came on others in the following weeks and picked up the job very well. Turns out there was something else there as well as we were engaged that October and married on January 1st 2014.

From managing and working the landscaping company to all pool table jobs, Allison and I worked side by side every hour of every day (to the amazement of many of our married customers). I’m not sure I would have it any other way. Allison is as good of a pool table technician now as any other out there. We work very well together, we were described on our Facebook page by one customer as “like watching 1 person with 4 arms.” Having the reliable, skilled help of Allison has allowed Maine Home Recreation to grow by leaps and bounds over the last several years.

After winding down working for the lawn company ourselves for a couple years we sold it in 2017 to focus solely on home recreation. We opened a retail showroom and early in 2014 started selling new pool tables and games in addition to the used products we offer. From there we acquired warehouse space and now have a larger showroom and warehouse that we work out of. We cover a large area, use high quality materials, warranty our service work for life, have fair prices and treat people right. We grow by leaps and bounds every year and are confident that this formula will lead us to further expansion and the next chapter for Maine Home Recreation.

Our showroom is located at 25 Adams Ave. in Lewiston, Maine.

Maine Home Recreation is open Monday through Friday 9-5 and 9-2 on Saturdays. We can also open anytime by appointment.
To set up an appointment or for customer service, just call (207) 740‑6135 anytime between 7am and 10pm 7 days a week. When you need us there we will be there for you!

We will ship anywhere in the US!
Our shipping program lets us check rates across several carriers to make sure we are giving you the best value. For larger items we have a variety of  truck freight options.
Most of our manufacturers also offer drop shipping from the factory directly to your door! If you need it, we’ll get it there!

We do not display used pool tables as the shelf life on them is typically brief, however you are welcome to come and see them disassembled in the warehouse if you would like!

We show our most popular pool table styles in a variety of woods and finishes. We also display Shufflebords, Foosball, Air Hockey, Pub Tables, Poker tables, Chairs, Barstools, Dart Supplies, Wall Decor, Lighting and every accessory you could need in your game room.

If you have any questions about what is available, who we are or what we do, we encourage you to set an appointment and come meet us. We will be happy to show you our products and talk about our services. We are Maines most experienced home game room professionals and look forward to sharing information with you about the best quality home game room equipment money can buy!

Pictures below are from our first showroom space. Shown as examples of our product offerings. Offerings may differ by season. 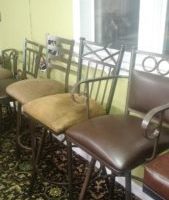 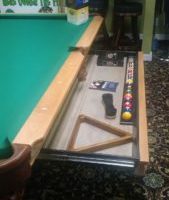 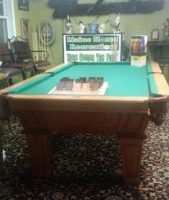 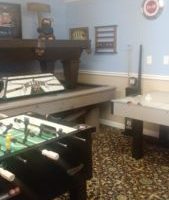 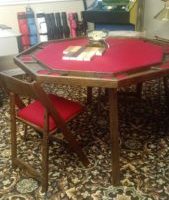 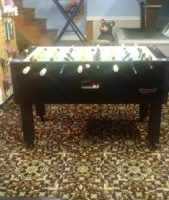 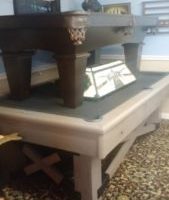 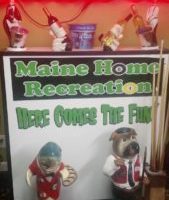 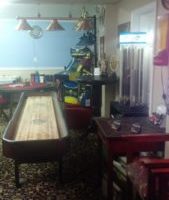 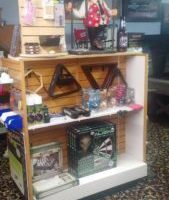 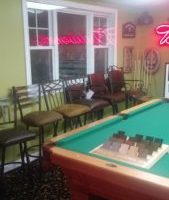 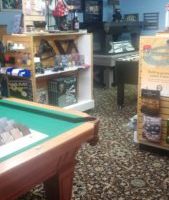 We will again be exhibiting at The Fryeburg Fair from September 29th to October 6th! Come and see us there for great deals and a perfect time to order for Christmas! 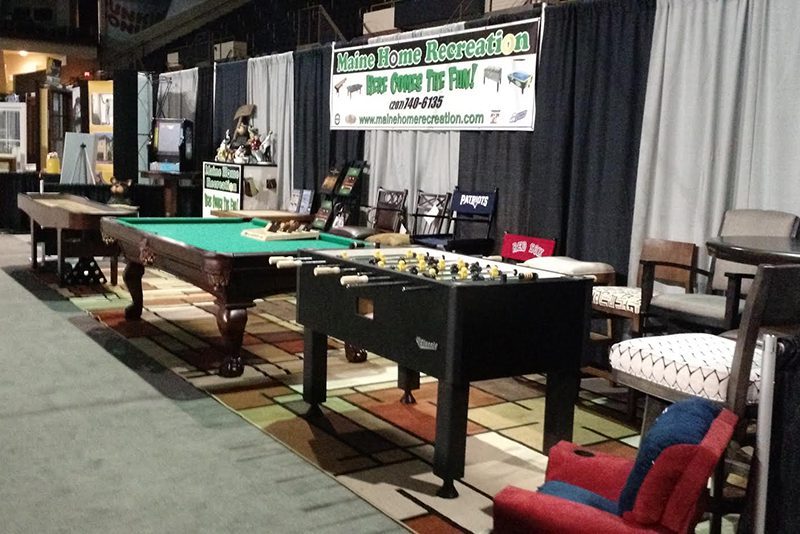 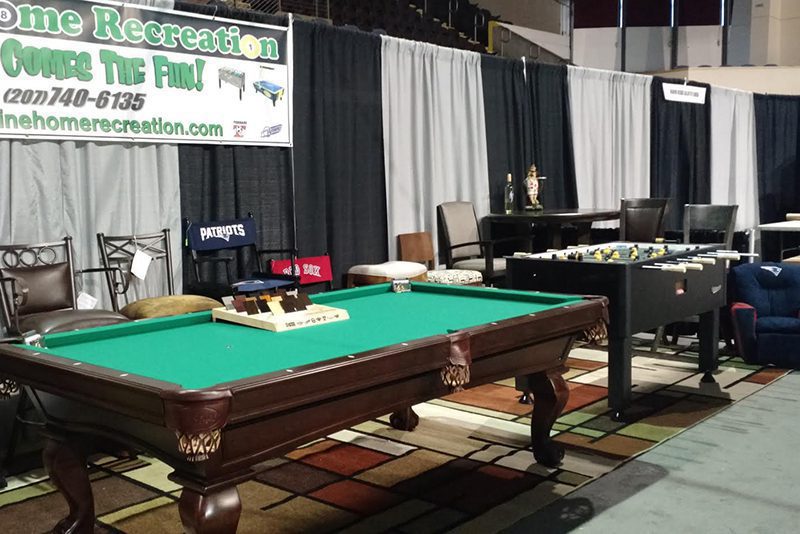 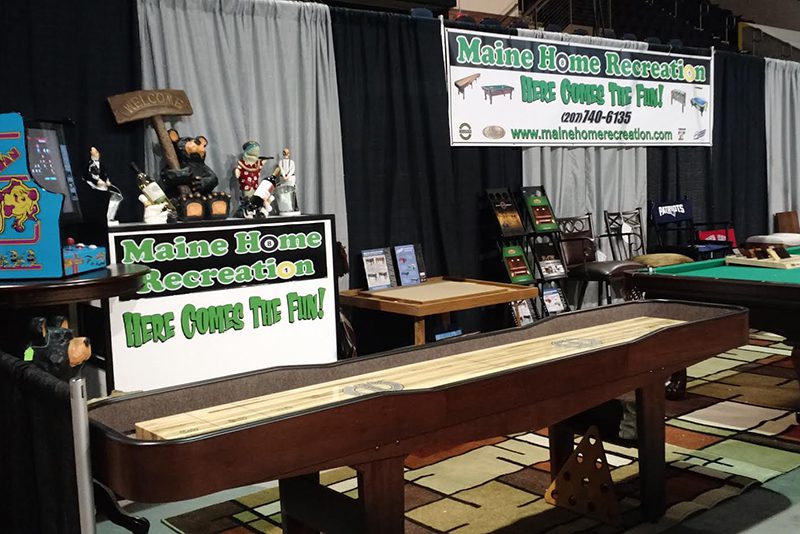 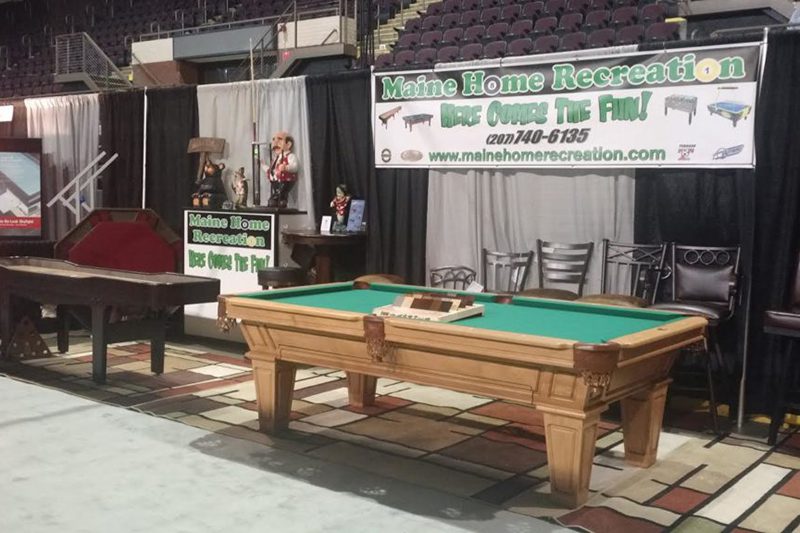 Maine Home Recreation warranties the installation of any quality brand pool table it installs for the lifetime of the table. This includes leveling. Slate seams and items that are detrimental to the pool table structure or cloth will be scheduled and done immediately. Minor leveling, relocation, humidity issues and other non emergency issues will be scheduled around other jobs in the area, when those jobs come up at the convenience of Maine Home Recreation. Maine Home Recreation takes no liability for tables placed against recommendation or for tables set up by customer request against accepted industry best practices.

We accept returns on any unopened items in their original packaging within 30 days for full refund or store credit.
Opened / used items may be returned at the discretion of Maine Home Recreation and a re stocking fee may apply.